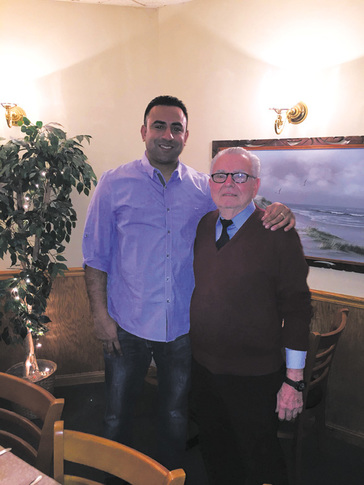 Entrepreneur Bud Patel has a great fondness for Ewing.

“There is a reason I am putting all of my eggs in Ewing. I now own three businesses in Ewing and three houses in Ewing,” Patel said.

The new crown jewel in Patel’s budding business empire in Ewing is Freddie’s Tavern. Patel officially took over ownership of the 83-year-old Ewing institution in December.

And Patel’s not done. He says that as long as Ewing stays business-friendly, he’s going to invest in the town.

“They have a railroad, an airport and a college,” he said. “You have the ingredients for success here. At the end of the day, small businesses are the backbone of Ewing.”

But while Patel is driven to continue adding to his list of accomplishments in town (he hints that he might even have political aspirations in Ewing), he’s in no rush to make major changes at Freddie’s.

“About 90 percent of our employees stayed with me,” Patel said.

And while he hired a new chef and kitchen manager, Tim Boyan, the former chef at Café 72 and Metro Grill, neither Patel nor Boyan has plans to make radical changes to the restaurant’s menu.

“We are trying a lot of specials. We have so many favorites people love,” Boyan said, adding that they are striving for a mix of new with the old.

According to Patel, Boyan came to work for him because he was looking for something larger.

“We brought him in one day and we hit it off. We knew it was going to work,” Patel said.

“We have professional chefs,” Patel added. “I let them do their job.”

The restaurant holds taste testings on Friday nights and talks to 20 to 30 regulars to get their ideas on what they like to eat.

“I’m very mindful of change. We have received feedback from people that they love the job that we are doing and seeing new stuff on the menu,” said Patel.

He said they’ve been adding specials to the menu on a weekly basis, including braised short ribs, pulled pork and mahi mahi.

“Every two weeks we come out with a new dish and see when it works,” he said.

“It [Freddie’s Tavern] is in good hands,” said Patel, adding that it took 14 months to transition to the new ownership.

And if Patel needs any advice, help is just a short walk away. The restaurant’s founder, octogenarian Freddie Urbano, or “Senior” as Patel affectionately calls him, still lives next door to the restaurant.

“He is in like he never left the place,” Patel said. “We really hit it off from day one. It is very unique. Typically buyers and sellers never talk afterwards. I feel like it was a marriage. I know all of Freddie’s kids and family. I hang out with them all the time.”

“He still bosses me around,” Patel jokes. “It is awesome having him here. It is like an instruction manual for this place. He knows every little in and out of this building. He is priceless.”

Freddie’s son, Freddie Urbano III, referred to as “Junior” by Patel, comes in on a regular basis, too and the two have a good relationship.

“We take care of each other,” Patel said. “There is a lot of trust between us.”

“Through this whole process he has been amazing,” he said. “He comes from a background of a family business. It seems to come easy for him.”

Urabo adds that Patel has understood that there would be a transition period for the family after owning the restaurant for so many years, and he has been very welcoming towards them.

“My father loves being able to be here. They look out for him,” Urbano said. “It is very comforting for us as a family. We are very grateful Bud is here, especially my father. He has been very gracious and we feel very comfortable.”

For Patel, business is in his blood. His father, Dinesh, owned more than 30 other businesses, including Dawn Bottle and Spirits, located on Pennington Road, which was run by his mother, Pallovi. She was actually nicknamed Miss Dawnie by many of the store’s regulars after the name of the business.

Dinesh also owned a number of newsstands in New York City, and he bought his first newsstand in Times ried. Bud Patel finally sold the newsstand business about a year ago after he noticed people reading less newspapers and magazines, and becoming more health conscious and buying less candy and cigarettes — the backbones of that business.

Meanwhile, Patel’s parents decided that they didn’t want to raise their children in New York City and moved to Spotswood, where he grew up with his two older sisters.

Patel moved to Columbus, Ohio for college, which was a welcome change at the time. “I’d always live in New Jersey, and I wanted to experience something different for four years.”

He graduated from The Ohio State University Max M. Fisher College of Business in 2006 and took over running his dad’s businesses when he went into semi-retirement.

In addition to Dawn’s Bottles and Spirits, Patel also owns Taste Buds Bar and Grill (a Mexican restaurant in Chambersburg), Taste Buds (a pizza and deli in Ewing), two Learning Express daycare centers and assorted other businesses throughout New Jersey.

Patel’s wife, Sweta, runs the two Learning Express centers — one in North Brunswick and the other in Piscataway. In the mornings Sweta takes their two-year-old son Krish to work with her at the New Brunswick school.

As for the future, Patel said he has big plans for Freddie’s.

“A little bit of love and this place can be phenomenal. I want to bring it back to the glory days.”

He said the good food still brings in the customers, but the restaurant’s décor needs to be updated.

“It still looks like it did in 1980. It needs to keep up with the times,” PAtel said. “I’m focusing on changing the aesthetics while keeping the charm.”

But he won’t make changes all at once. Instead he plans to take a phased approach. “I want to do it in stages. I don’t want to shut down [during construction].”

Most of his planned changes are cosmetic. Structural changes include moving offices upstairs, which would expand the kitchen. He also notes that three out of four people currently prefer sitting at the bar, which he believes will change with renovations to the dining hall.

He also wants to add outside seating and create more seating for the bar, which gets packed, especially on Friday and Saturday nights.

The dining hall area currently seats 65-70 people. The banquet hall maxes out at 100 people. The long-term plan is to build a place that can hold parties of 700-800 people, or add partitions for smaller events.

Patel emphasizes he has only owned Freddie’s for two months and it’s still a learning process.

“I’m trying to understand the business: operations, orders, employees, the numbers are important to me,” he said. “I’m confident this is the place that could be the life change for us.”

Guide to municipal news and Covid-19 updates during the crisis

March 24, 2020
A number of area grocery stores have altered their hours and services due to safety precautions necessitated by the spread of COVID-19