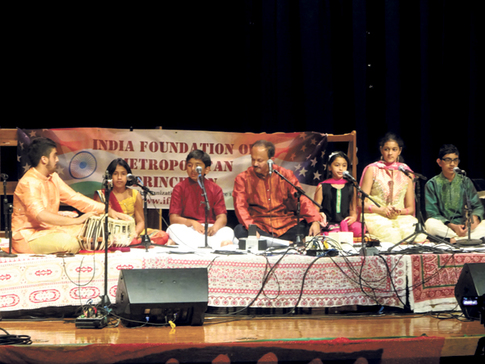 The India Foundation of Metropolitan Princeton, which is based in West Windsor, will celebrate its 39th anniversary at its annual picnic at Mercer County Park East on Sunday, Aug. 7.

The event, which takes place from 11 a.m. to 5 p.m., will feature activities such cricket, volleyball and badminton. For kids there will be a running race, three-legged race, face painting and a balloon artist.

“The annual summer picnic is becoming a cultural and social oasis for the community to come together, make new friends, reconnect with Indian culture and traditions and enjoy a fun filled family outing with the community,” said Sanjay Phanse, IFMP president.

IFMP, a nonprofit established in 1977, is one of the oldest community organizations serving Indians in the Mercer County area. It holds various events throughout the year, including: Holi, a festival of colors where color, kites, fun and food provide a backdrop to welcoming spring; and Navratri—a traditional Indian dance festival celebrated in autumn.

The organization is coming fresh off a celebration on July 17 at Community Middle School of the one-year anniversary of the Golden Group, a subgroup created last year to help address the social and cultural needs of the growing population of aging Indians.

Phanse says the Golden Group’s charge is to bring activities and events that are of interest to people in the 55-plus age group and provide them with a platform for social and cultural interactions and a support network to reach out when in need of help.

Phanse said the founders of the group “were not interested in activities for growing families and asked for something for them. Some retirees see their social life dwindling and their circle of friends diminished. It is time for them to create their own activities and keep engaged in the community. There are a lot of retirees that do not always connect with area senior centers.”

During the Golden Group’s monthly meetings, attendees discuss ways the IFMP can help members of the aging Indian population. One of those ideas, an initiative called Helping Hands, was formed as a way for active seniors to help out those needing assistance with transportation to doctor appointments, shopping needs or places of worship. They are also working to create an app to match people with those willing to volunteer.

Phanse, who has been IFMP president since last year, moved to West Windsor with his family in 1994. After moving to the United States in 1986, he received a master’s in management of technology in a dual program from the Wharton School and Penn Engineering. Through the years he has worked as an IT management consultant for a number of financial institutions.

“The community interest in IFMP and its activities has increased exponentially as is clearly evident from the all-time high levels of membership and business sponsorships at each of our events this year,” Phanse said. “We appreciate the outpouring of community support and promise to bring the best to the community at all events.”

July 2, 2020
The second week of June seemed to start a sort of reckoning in Hamilton, with rallies stressing the importance of supporting people of color.

The road to the Negro Leagues ran through the Garden State