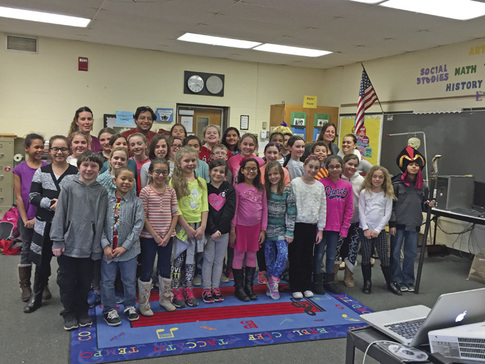 Fady Zaher loves to teach. He also loves to sing, act and play the guitar, piano and bassoon. What the elementary school music teacher loves do the most, though, is provide an opportunity for his students to use their theatrical talents for their own enjoyment, and for the enjoyment of others.

And that’s just what he’s been doing the past seven months, preparing his Langtree Elementary School students for two public performances of Disney’s Aladdin in March. It’s a labor of love for the Hamilton native.

Zaher, a graduate of Steinert High School and The College of New Jersey, has been influenced by his upbringing.

“My mother, Samia Youssef is a music teacher and a bassoonist, and I always admire her passion for what she does,” said Zaher, who was born and raised in Egypt before moving to Hamilton in 2000. “My dad, Onsy Zaher, who is deceased, taught me the importance of character. When I got the job as the vocal music teacher at Langtree and Lalor Schools in 2011, I knew in my heart that I wanted to transfer what I learned from my parents, and my love of the theater to the kids.”

So, Zaher asked the administration at Lalor Elementary if he could try out having a big school production.

“The result was beyond my expectations,” Zaher said. “The school needed that avenue of the arts and the exposure, and I felt very blessed working with the students and teachers who are very special to me.”

One of those students was Christopher McRae, who played the Genie. When Zaher found out that Hamilton Township School District arts supervisor Danielle Tan was putting together a documentary about all the arts and music education at the township’s schools, he and Lalor Elementary art teacher Eileen Masterson nominated McRae to be included.

In the film, students discuss how the art program in their school has influenced their lives. This documentary will be presented to the community at the school district’s annual Fine and Performing Arts Festival, which will be held at Grounds for Sculpture on March 16 from 6-8 p.m.

Word of Zaher’s production had spread around the district before the making of the documentary, though. The Langtree staff and administration saw the success of Lalor School’s Aladdin, and approached Zaher to ask if he could do the same at their school.

“I told the teachers, jokingly, that it is a lot of stress and work, but that I would definitely think about it,” Zaher said. “It didn’t take long, though, for me to say yes. Although, I actually feel more comfortable performing in plays like the ones I have done, ‘Pirates of Penzance,’ and the one I am doing now at Kelsey Theatre, ‘Mary Poppins.’ Being behind the scenes is so much harder, but very rewarding.”

After getting permission from Langtree principal Joyce Gallo, Zaher got to work on his second production of his favorite musical, one that he feels is appropriate from a cultural aspect.

“All of the teachers and students were so excited when they found out we were going to do the play,” Zaher said.

He held tryouts in October for third to fifth graders, with some second graders who were handpicked by Zaher. About 60 kids showed up, and Zaher chose 40 for the show.

“I saw such a transformation in the kids from day one,” Zaher said. “They are so eager to learn acting, singing and scripting. The entire process has been an eye-opening experience with so much professionalism by everyone involved. Everyone is doing a fantastic job.”

One difference with the Langtree production is that it will be performed at Reynolds Middle School. Since this is the second time the play will be done, Zaher felt that a larger audience would like to see it, and decided to have it at a facility that will accommodate more viewers. The show will be performed March 21 and 22 at 7 p.m. Tickets are $5.

“When the play was done at Lalor, and performed at the school, we had a huge palace built by first grade teacher Ruth Orama and her fiancé Emanuel Guerra,” Zaher said. “We are able to use this and other props, which helps a lot. Having our show at Reynolds is going to enhance the entire experience.”

Zaher is thrilled with the way that the parents are helping to make things run smoothly. Some parents are sponsoring the show and have gotten businesses to sponsor it as well. The PTA is also helping with fundraising.

With all of Zaher’s passion and commitment to this project, he couldn’t do it without the help of his coworkers, who are there every Wednesday after school, every Thursday and Friday morning before school, and whenever else things need to be done. This is being done on their own time.

Kindergarten teacher Julie Smith has worked by contacting parents, volunteers, teachers, administration, coaching actors and more. She and her husband donated props and other supplies for the production. Gallo, the Langtree principal, has set up a contest for students to design a flyer, and the winners of each grade will receive free tickets to the show.

“I am speechless as to the way the teachers are working together on this and how much extra time they are putting into the project,” Zaher said. “They are all very professional, and I enjoy working with them.”

Jessica Namur, a kindergarten teacher and volunteer, says she loves coming to the practices.

“Fady Zaher should be teacher of the year,” Namur said. “The dedication that he has to the students is amazing, and he gives up san unbelievable amount of free time.”

“I get chills and feel very emotional when I watch our students during the practices,” Ohmed said. “I am so proud of the kids, and can’t wait to see the show.”

Choreographer Melissa Hurst, a fifth grade teacher, also loves being a part of this venture.

“The kids are allowing me to use my love of dance and envision what I see them doing in the play,” Hurst said. “At first, I didn’t want it to be too much for them. I started with easy steps. Well, since they are such great learners, I was able to give them more and more each week. They are amazing, and so is Zaher. His direction of children is incredible.”

The students involved in the play are estactic with this opportunity. Katharine Kusnirak, Braeden Petrol, Gracyn Nutt and the entire cast said they are enjoying the singing and dancing.

“I have never been in real play before, and I decided to try out because I love to dance,” Nutt said. “Mr. Zaher and all of the teachers are great. We all look forward to practice everyday, and we have so much fun. I love being with all of my friends.”

Students from Langtree Elementary School will perform Disney’s Alladin at Reynolds Middle School March 21-22 at 7 p.m. Tickets can be bought at the door for $5. For more information, call Fady Zaher at (609) 631-4157.