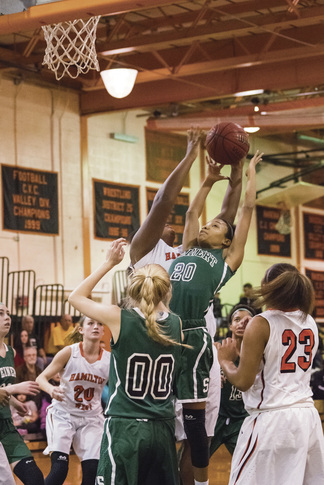 With the way Steinert girls’ basketball coach Kristen Jacobs shuffles players in and out of the lineup, no particular player is going to dominate the stat sheet every night.

Through Steinert’s 9-9 start, the team’s leading scorer was scoring 5.6 per game while the leading rebounder was averaging 6.1 boards. Both of those numbers belonged to the same person: senior forward Brianna Dorner.

For good measure, Dorner also was second in steals with 19 (behind younger sister Tatiana’s 42).

“Bri has been just a steadfast player,” Jacobs said. “She’s not the loudest player, not the flashiest player, but Bri is always constant with her leadership and her mentality on the floor.”

Dorner is the fourth of five basketball-playing sisters, as Tanisha, Leah and Cassie all played for Steinert.

After watching her older siblings play, Dorner followed them into the Hamilton PAL at age 5. She also played AAU ball for the New Jersey Mavericks in her freshman and sophomore years of high school, until the team disbanded.

“I just loved playing,” Dorner said. “As soon as I could, I wanted to play Hamilton PAL, and I stayed with them until this year. I didn’t do it this year because coach didn’t want me to get injured.”

As a sophomore, the 5-foot-6 Dorner played for the Spartans’ JV team, and she also played in 16 varsity games. Her statistics were modest as she scored 13 points, but even then she showed a penchant for rebounding with 12.

“Boxing out is the key,” she said. “I’m not the biggest girl out there but I try to box out. In practice, we have this thing where you throw the ball off the backboard and you box out a girl and put a body on her so she doesn’t get the rebounds. That really helps me.”

Dorner became a regular during her junior year, averaging 2 points and 2.8 rebounds per game. She showed flashes of her ability, scoring 10 points against a talented Hopewell Valley team and grabbing seven rebounds in games with Nottingham and East Brunswick.

As an added bonus, last year, Dorner finally got to play with one of her sisters, as freshman Tatiana was placed on varsity.

“Oh, I love it,” Dorner said. “Sometimes we’ll argue. But we don’t argue on the court. I love playing with her because she’s so fast, and she looks for me, I look for her.”

There have been other games where Dorner has been held to three points or below, but that has more to do with Steinert’s system and rotation than it does with her ability. And on nights when she’s not scoring, she’s playing tenacious defense.

“Bri is just a quiet workhorse,” Jacobs said. “She’s not going to give you 20 and 10 every night, but she’s going to give you everything she has every time she’s out there. We ask her to guard some of the bigger players out there as an undersized forward. People underestimate her speed and how quick and fast she is.”

Dorner agrees with her coach, that she is not the flashiest player around. She just keeps grinding away.

“I’m not real showy,” she said. “I’m not the one to always make the most scores, the most rebounds. But I do what I have to do. When she tells me to do something, I do it. Or I try to do it.”

One of Dorner’s best traits has been her leadership, which Jacobs said, “has been great these past few years.”

“Bri’s senior class came in with me their first year,” the coach said. “They’ve had the opportunity to see what I want from them. Different people have had to step up after the graduation of some of those other seniors and her leadership has been steadfast.”

Dorner welcomes that role with open arms. She tries to talk to help out each girl on the court, and she always makes sure there is never any arguing between teammates on the floor. She likes to keep court chatter up.

Dorner is a member of the Steinert Key Club, and she is also a three-letter athlete, as she played for the tennis team and runs track. Her future is already mapped out, as she plans on attending Montclair State to pursue a degree in athletic training.

“I enjoy helping people and I play sports, so it mixes well,” she said. “I’ve always watched the trainer a lot and was always in interested in what they did.”

Scarce inventory is driving up the price of Central Jersey homes

Ewing mayor talks about the state of the township in 2021

Rosedale Mills finds people have an appetite for food trucks