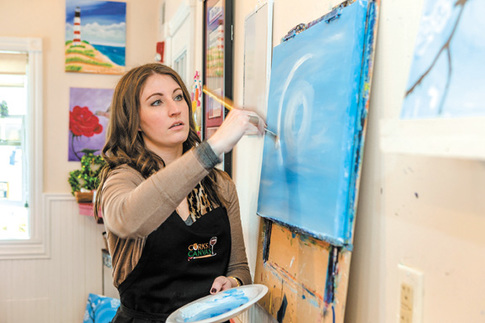 After 37 years managing Quakerbridge Radiology in Hamilton, Rosemary Sudnick felt it was time for a career change. She had always dreamed of owning her own business, and after several great experiences at BYOB painting parties around Flemington, Sudnick decided to open a studio — Corks & Canvas — in her hometown.

Situated on Gordon Avenue next to the Gingered Peach Bakery, Corks & Canvas offers a cozy, vineyard-themed studio space where guests can enjoy wine, catch up with friends and create an original piece of artwork.

Rosemary, a Lawrence Township native, and her son Glenn Sudnick, a 2002 graduate of Notre Dame High School, took over the former art therapy studio and opened Corks & Canvas in 2014 to provide a new form of entertainment for the community.

Although she had no artistic background, Glenn says she was always a good entertainer and hostess for family gatherings, so no one questioned her when she decided to open her own paint and sip studio.

“It’s like hosting a party,” Rosemary said. “And I’m kind of talkative and bubbly and stuff, so this is really fun for me. And I try to make it fun for everybody.”

The studio offers BYOB painting classes set in a relaxed atmosphere, under a canopy of starry lights and grape vines. Guests are set up four to a table with their own easels and an artist leads the session with step-by-step instructions. Classes typically run for two and a half hours and include cheese and crackers, packaged snacks, bottled water and soft drinks as well as all art supplies. All you need to bring is the wine (or beer).

Worried that you don’t have an artistic bone in your body? No need to worry, say the Sudnicks. The artist breaks it down for you and even supplies stencils for you to outline more difficult shapes.

“It’s very rare that a painting doesn’t come out good,” said Glenn, who now lives in Yardley with his wife Brigid Sudnick and their three-year-old son Samuel.

Corks & Canvas has seven different artists who instruct classes and design the paintings, providing a variety of art styles to meet everyone’s tastes. The featured paintings range from seasonal landscapes to still lifes of pink martinis, to pet portraits. Guests can check the online calendar to view the featured painting for their date of choice.

“They really come out pretty good,” Rosemary said. “Really, it’s amazing because the artists teach it step-by-step and it is beautiful. The background’s easy, but the harder ones, we have a template for and it works out real well.”

The mother and son team say they never planned to go into business together­­ — it just worked out that way. Glenn, current owner of Quakerbridge Pharmacy in Hamilton, began working at Lawrenceville’s Penlar Pharmacy at the age of 14. There he learned everything there is to know about the business, leading him to attend pharmacy school at Massachusetts College of Pharmacy and open his own business in 2011.

So when Rosemary was in need of a business partner, it seemed like the perfect match. While Rosemary is the hostess of Corks & Canvas, Glenn runs the behind the scenes, keeping track of all of the finances and paperwork for the studio.

The two say that they’ve always had a very close relationship and think of each other like best friends. Rosemary and Glenn’s father divorced when he was just 10 months old, and she raised her son as a single mother.

It wasn’t until after Glenn went off to college that Rosemary considered another serious relationship, and she found her current partner Ralph Castagna, who helped build everything at Corks & Canvas — including the tables and decorative lattice — when the studio openined.

Rosemary says that since then, she’s become very close with many of her customers.

“When I first opened,” she said, “I thought people would come once and then not come again. You know a one and done kind of thing. But I have people that have been here 10 times. They’re regulars and I’ve gotten to know them so well.”

People like Corks and Canvas for different reasons. Some come to celebrate special occasions like birthdays and bachelorette parties, some use the class as a get-together with friends and some just like to come and unwind, delving into their painting and forgetting about any worries they may have.

“So many people say it’s like therapy,” Rosemary said. “People have so many problems and then they sit here for 2.5 to 3 hours, only focusing on their painting and not thinking about everything else, it helps them so much! They’re like ‘I’m so relaxed, this was so much fun!’”

According to Glenn, a lot of people who come in used to love painting, but stopped doing it because they didn’t have time or materials available to them. The studio offers a adults the chance to practice their art skills and to fire up their creativity — which they may not get to do every day.

Glenn says that now more than ever, people are enjoying this type of entertainment, which is more hands-on and active.

“It’s about the activity,” Glenn said. “People like to do things now as opposed to just sitting. On Mark Cuban from Shark Tank says that he thinks the future of entertainment is interactive entertainment — where it can’t just be sitting in movies- and I think [Corks & Canvas] kind of goes along with that.”

As lifetime Mercer County residents, the Sudnicks also make a point to work in the community, hosting outside events and helping with fundraisers. They’ve participated in benefits for the Marie Katzenbach School for the Deaf and the Robert Wood Johnson Breast Cancer Fundraiser and are currently planning to host benefits for the St. Baldrick’s Foundation on March 7 and for the Sunshine Foundation in April.

While the studio is open for classes five days a week, Rosemary also hosts a monthly painting event for the public at the ETS Chauncey Center in Princeton. Guests can participate in one of Corks & Canvas’s art classes with the option to purchase cocktails, appetizers and other food from the restaurant as they work on their painting.

The Sudnicks say that the best part about owning Corks & Canvas is that they get to be a part of many special occasions in people’s lives- whether it be a birthday, a baby shower or a date night out. Rosemary even helped arrange a marriage proposal during one of paint classes and recorded the whole thing on video for the couple to show their friends and family.

“He called me ahead of time,” Rosemary said. “We arranged it so they were in the corner and nobody could see his painting. Then, at the end, he turned it around to show her and it said ‘will you marry me?’ Then you hear everybody gasp, and he went down on his knee. She was like ‘oh my god, oh my god!’ It was so cute!”

It’s moments like these that are the best part of the job, Sudnick said.

Corks & Canvas is located at 8 Gordon Avenue in Lawrenceville. The studio offers classes every Wednesday through Sunday, for $37 each and is also open to host private events. Call (609) 895-0340 or register online atcorksandcanvasnj.com.

July 6, 2020
The MVC designated its state agencies as either a vehicle or licensing center to limit specific operations to each location and follow safety guidelines.