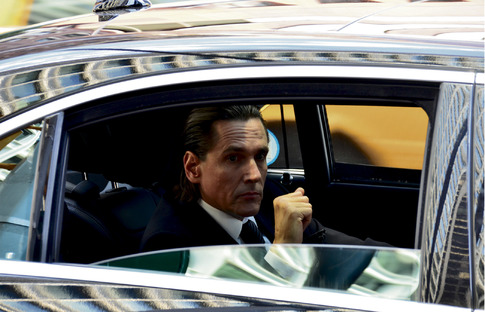 In the opening scene of “Junkie Heaven,” actor Joseph Halsey lays on a bed, passed out in a dirty white undershirt with a hypodermic needle sticking out of his left arm. His skin is extremely pale, his lips are dry and cracked. It’s hard to say whether or not he’s alive.

Halsey, a Robbinsville resident, has recently received recognition for his performance in the 18-minute short film directed by Steve Sage Goldberg, where he plays an Iraqi war veteran with PTSD who turns to narcotics after returning home. The performance earned Halsey the title of Best Actor in a Short Film at the 2015 Long Island International Film Expo and the 2016 Macabre Faire Film Festival on Long Island.

“Junkie Heaven,” along with four of Halsey’s other films, will be on view at the 14th Annual Garden State Film Festival set to take place in Atlantic City March 31 through April 3.

Halsey has always valued the creative arts and it reflects in his extensive portfolio as a musician, actor, writer and director.

He grew up living with his mother in Trenton, though he moved to live with his father in Melbourne, Florida just before high school. There, his English and drama teacher Linda Rapp encouraged Halsey to try out acting.

“Her and my father were to blame,” Halsey said. “Even though I was athletic, I still had a lot of pent up energy and I now see that that was creative energy. They decided that it would be a good idea for me to get into drama and be on stage.”

So Halsey gave it a shot and landed the lead role of Conrad in the high school’s production of Bye Bye Birdie.

“I’ve always been a musician,” he said. “I got up there and it was the same high that I got from playing in a band. I went ‘Wow, this is pretty cool. I could dig this.’”

Halsey knew that he wanted to attend art school for college, but he had never learned to read or write music. So he saw acting as his way in.

His talent was enough to get him accepted into the acting program at Florida School of the Arts, where he spent four years, and after which he was accepted into a two-year intensive at The Acting Studio in New York City. He headed back to the Northeast and commuted to the city from Trenton while participating in the program.

Halsey continued to play music and perform in off-Broadway shows until he caught his first big break—a recurring role of a pizza delivery boy on The Cosby Show, which he landed when he was 23.

“That was my first real paying, legit, have my own dressing room, treated really well gig,” he said.

Always caught between different creative pursuits, Halsey decided to leave the city and take a break from acting to go on tour with his band, Bigger Than Plastic.

“I wanted to be with my best friends and write music and play in Philly and New York and everywhere in between,” he said.

The band included vocalist Dave Pantaleone—Halsey’s best friend since the age of 10—and brother Ray Pantaleone on drums.

“For roughly 10 years, I hung out and wrote music, played in rock bars and had an amazing time,” Halsey said. “It was the best thing I ever did. We just had the best time ever.”

Halsey absolutely loved life on the road, but says that they weren’t making any money. After the band stopped touring in 2006, they started Eclecticism Publishing to sell their music (without the vocal tracks) to television shows. To the group’s surprise, Ashton Kutcher’s production team picked up some of their songs to use on the show Punk’d. Similar programs were soon to follow, including MTV’s Pimp My Ride, Making the Video and CMT’s Trick My Truck.

“All the sudden, we got our first check, and we were like ‘oh my god, we’re making money at this thing!’”

Around the same time, Halsey decided to return to his Jersey roots to be closer to his family and to have more space to play with his 160-pound Old English Mastiff, Romeo, who he says is more famous around town than himself. He moved to Robbinsville in 2004.

Halsey returned to acting in 2006, attending several seminars in NYC, where he happened to be screened for a small role on Law and Order. He says it was a quick cameo as a guy in a bar, but a year later, the agency asked him to come back and audition for a recurring role as a police officer.

“Now that’s the role you want because when you’re a character, they can’t bring you back for a year,” he said. “But when you’re a cop, you can come back as much as they want you to—the cops can always be in the same district.”

Halsey says he was lucky enough to land the role on Law and Order, and soon enough, he began getting cop roles on other shows including Guiding Light and One Life to Live. Though he really enjoyed portraying these characters, Halsey says it got old being typecasted after a while.

“I was just this cop all the time,” he said. “The first thing that you have to learn about yourself as an artist is what your range is, and I knew my range was larger than being a cop.”

Halsey was in need of a change and wanted to challenge himself, so he decided to change his look, growing out his hair, to fit the part for a different genre of characters.

“It had nothing to do with money or ego, but creatively I needed to branch out,” he said.

His first role after modifying his look was the character of Doyle Burkett in “Junkie Heaven.”

Halsey said that he’s very dedicated towards every role that he plays, and he has very high expectations for himself. He dropped 20 pounds in just a few weeks in order to fit the role of Doyle Burkett.

Since starring in “Junkie Heaven,” Halsey has been able make a name for himself in the independent film scene. He went on to play in the short films “Stand Up Guy” and “Leaving,” as well as in the feature film “Stuff,” which will all be screened at the Garden State Film Festival.

“I started getting in with these different groups,” he said. “I played everything from a 140 pound junkie to a 173 pound mob guy, to a soft-spoken hippy dad—and it was great.”

Halsey was also able to write and direct his first short film “Choice ‘Mother.’” The seven-minute long film highlights on the subject of Death with Dignity through the story of a mother and her teenage daughter who has a terminal illness and is choosing to end her life before the cancer does.

The film was inspired by Halsey’s father who struggled with multiple sclerosis for 30 years, before he passed away in 2008.

“My father was very boisterous with me,” Halsey said. “Ever since he was diagnosed, he talked about how he wanted things to go. It was great because I didn’t have to make any decisions. He made them himself.”

Through his films, Halsey aims to raise awareness about causes like Death with Dignity and to get people thinking about important issues.

“This is what I’m trying to tell people,” he said. “Talk about it. Tell the people you love what you want. It may seem like a morbid subject, but you’re going to save people so much pain and anguish by telling them what your wishes are.”

Halsey’s directorial debut will also be showcased at the Garden State Film Festival.

Tickets to the screenings are $12 per session or $30 for a day pass. For ticket purchases and complete screening times, visit gsff.org.

Ewing mayor talks about the state of the township in 2021

Rosedale Mills finds people have an appetite for food trucks